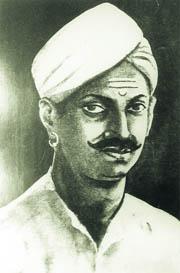 Mangal Pandey was a soldier in the 34th Regiment of the Bengal Native Infantry (BNI) of the English East India Company. He is widely seen in India as one of its first freedom fighters. The Indian government has issued postage stamps commemorating him as a freedom fighter and his life and actions have been adapted to the silver screen. The primary motivation behind Mangal Pandey’s behavior is attributed to a new type of bullet cartridge used in the Enfield P-53 rifle which was to be introduced in the Bengal Army that year.

At Barrackpore on March 29, 1857, in the afternoon, Lieutenant Baugh, Adjutant of the 34th Bengal Native Infantry (BNI), was informed that several men of his regiment were in an excited state. Further, it was reported to him that one of them, Mangal Pandey, was pacing in front of the regiment’s guard room by the parade ground, armed with a loaded musket, calling upon the men to rebel and threatening to shoot the first European he set his eyes on. Baugh immediately buckled on his sword, placed loaded pistols in his holsters, mounted his horse, and galloped to the lines. Pandey, who heard the hoof-beat of the approaching horse, took position behind the station gun, which was in front of the quarter-guard of the 34th, took aim at Baugh and fired. He missed Baugh, but the bullet struck his horse in the flank, and both horse and rider were brought down. Baugh quickly disentangled himself, and, seizing one of his pistols, advanced towards Pandey and fired. He missed. Before Baugh could draw his sword, Pandey attacked him with a talwar (an Indian heavy sword) and closing with the adjutant, slashed him on the shoulder and neck and brought him to the ground. It was then that another soldier (sepoy), Shaikh Paltu, intervened and tried to restrain Pandey even as he tried to reload his musket.

The primary motivation behind Mangal Pandey’s behaviour is attributed to a new type of bullet cartridge used in the Enfield P-53 rifle which was to be introduced in the Bengal Army in 1857. The cartridge was rumored to have been greased with animal fat, primarily from pigs and cows, which could not be consumed by Muslims and Hindus respectively (the former being abhorrent to Muslims and the latter a holy animal of the Hindus). The cartridges had to be bitten at one end prior to use. The Indian troops were of the opinion that this was an intentional act of the British, with the aim of defiling their religions.