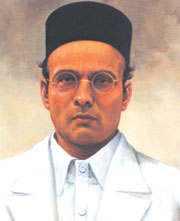 Vināyak Dāmodar Sāvarkar was an Indian freedom fighter, a revolutionary and politician. He was the proponent of liberty as the ultimate ideal. He is credited with developing the Hindu nationalist political ideology Hindutva. Savarkar was a poet, writer and playwright. He launched a movement for religious reform advocating dismantling the system of caste in Hindu culture, and reconversion of the converted Hindus back to Hindu religion. The five philosophical dimensions of Savarkar were Utilitarianism, Rationalism and Positivism, Humanism and Universalism, Pragmatism and Realism

Savarkar’s revolutionary activities began when studying in India and England, where he was associated with the India House and founded student societies including Abhinav Bharat Society and the Free India Society, as well as publications espousing the cause of complete Indian independence by revolutionary means.  Savarkar published The Indian War of Independence about the Indian rebellion of 1857 that was banned by British authorities. He was arrested in 1910 for his connections with the revolutionary group India House. Following a failed attempt to escape while being transported from Marseilles, Savarkar was sentenced to two life terms amounting to 50 years’ imprisonment and moved to the Cellular Jail in the Andaman and Nicobar Islands.

While in jail, Savarkar wrote the work describing Hindutva, openly espousing Hindu nationalism. He was released in 1921 under restrictions after signing a plea for clemency in which he renounced revolutionary activities. Travelling widely, Savarkar became a forceful orator and writer, advocating Hindu political and social unity. Serving as the president of the Hindu Mahasabha, Savarkar endorsed the ideal of India as a Hindu Rashtra and opposed the Quit India struggle in 1942, calling it a “Quit India but keep your army” movement. He became a fierce critic of the Indian National Congress and its acceptance of India’s partition, and was one of those accused in the assassination of Indian leader Mohandas Karamchand Gandhi. He was acquitted as the charges could not be proven.