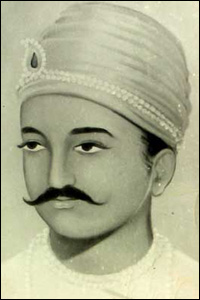 Tatya Tope’s original name was Ram Chandra Pandurang Tope. One of the great Indian freedom fighters, the name of Tatya Tope literally made British generals tremble with fear. He had such an aura with a fearsome reputation. His father, Padurang Rao Tope was a key noble at the court of Maratha Peshwa Baji Rao 2nd. Later on when his family shifted from Peshwa to Bithur, Tatya Tope developed friendships with Peshwa’s adopted sons, Nana Sahib and Maharaja Madhav Singhji.

When Lord Dalhousie deprived Nana Sahib of his father’s pension in the year 1851, Tatya took his first action against the British. He was completely against the unjust policies of the British rule. In May 1857, he devoted himself fully to the nation’s cause. He managed to establish his authority and also became the commander in chief of his forces as well as a pivotal figure in India’s freedom war in 1857. He was one of the most wanted freedom fighters by the British army because he had taken over the Indian troops of the East India Company stationed at Kanpur. The British Empire would use force and deception to capture everything India had by depriving Indians of their own rights. Along with other Indians, Tatya Tope also felt great discontentment against the rulers and decided to take his own actions.

Tatya Tope joined Rani Laxmibai in Kalpi and to occupy Gwalior, but they lost the battle and Rani Laxmibai was killed. The British managed to occupy Gwalior, but Tatya was not to lose hope. He continued to recruit soldiers and increase his forces and kept fighting the British. During this time, he won many crucial battles and captured forts. It is said that, Tatya Tope fought no less than 150 battles. He kept hurting the British rule with his Guerrilla campaigns. Although the British forces were unable to capture him, he was betrayed by his own friend Man Singh and on April 7, 1859, a British General captured Tatya Tope. He was hanged to death on April 18, 1859. Tatya Tope’s fierce patriotism will always be remembered by the Indian people.