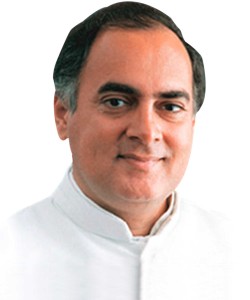 Rajiv Ratna Gandhi was born on August 20, 1944 in Bombay into India’s most famous political family as the elder son of Indira Nehru and Feroze Gandhi. His mother, Indira Gandhi and  grandfather, Jawaharlal Nehru were Prime ministers of India. His father Feroze Gandhi was also involved in politics. Rajiv gained his school education from “Welham Boys’ School” and from “The Doon School”. He studied engineering at Trinity College, Cambridge, but did not gain an engineering degree. In Cambridge, he met Italian student Sonia Maino and they were married in 1968. They had two children Rahul and Priyanka. Initially, he did not show any interest in politics and he worked as a pilot for the Indian Airlines. He entered into politics only after the death of his brother, Sanjay Gandhi in 1980 who helped their mother in politics. Shortly after Sanjay died, Indira Gandhi advised Rajiv Gandhi to enter into politics. He won his first parliamentary elections to the Lok Sabha in 1981 and he worked as an unofficial political adviser for his mother. However in 1984, when Indira Gandhi was killed by her bodyguard, Rajiv Gandhi took over as head of the Congress party and was sworn in as the Prime Minister. As Prime Minister, Rajiv Gandhi made a valuable contribution to modernizing the Indian administration. His government encouraged foreign investment by removing many restrictions on imports. He sought to increase Indian investments in modern technology. He modernized the telecommunications industry, the education system, expanded science and technology initiatives and improved relations with the United States. He also played a key role in the introduction of computers in India. In 1987, he sent Indian troops into Sri Lanka for peace efforts, but these efforts ended in open conflict with the Liberation Tigers of Tamil Eelam (LTTE) groups. During this time, he was accused of receiving “kick-backs” from a Swedish company manufacturing Bofors’ machine-guns. The Bofors scandal broke his honest, corruption-free image and resulted in a major defeat for his party in the 1989 elections. He did remain as Congress President until the elections in 1991. During his 1991 Election campaign in Sriperumbudur, Tamil Nadu, he was assassinated by one of the Liberation Tigers of Tamil Eelam (LTTE or Tamil Tigers) groups. He was a great leader and the Indian Government honored him by giving him the highest National Award of India, “The Bharat Ratna.”